Antibodies – special shaped proteins made by B cells of the immune system. The special shape allows antibodies to bind with foreign objects like bacteria and viruses in a way that neutralizes these invaders. Therefore, antibodies are an essential part of fighting infection. Antibodies are made and stored after infections or after vaccines. One way to examine if you have healthy antibody responses is to give you a vaccine and measure the antibodies you produce in response to the vaccine. This measurement is often referred to as “titer.”

APDS (Activated PI3K Delta Syndrome) – a rare primary immunodeficiency caused by variations in the PIK3CD or PIK3R1 genes. These variations cause B and T cells to function improperly, resulting in infections, trouble breathing, swollen lymph nodes, an enlarged spleen or liver, digestive tract issues, low numbers of blood cells, conditions where the immune system mistakenly attacks the body such as arthritis or eczema, and even lymphoma.

B-lymphocytes (B cells) – immune cells from the bone marrow that produce antibodies. (The “B” in B cell is for bone.) Along with T cells, they fight specific foreign objects that enter the body. One way B cells accomplish this is by making antibodies. 67-88% of people with APDS have reported low overall numbers of B cells.

Bronchiectasis – a condition where the bronchial tubes in your lungs widen and thicken. This makes them inelastic, and it’s difficult to move oxygen through them. It’s also easier for bacteria and mucus to accumulate in the widened spaces. The result is frequent infections, which along with overproduction of B and T cells in the airways can lead to permanent damage to the lungs. This damage can cause shortness of breath, coughing up mucus, and chest pain.

CD4+ T cells – also known as helper T cells, this type of T cell helps activate other T and B cells in response to foreign objects like bacteria or viruses, and also plays a role in turning the immune system back off once the foreign objects have been destroyed. 64-89% of people with APDS have low numbers of CD4+ helper T cells. “CD” is just a way that immune cells are named.

CD8+ T cells – also known as cytotoxic T cells, this type of T cell destroys specific foreign objects like bacteria or viruses. People with APDS often have high numbers of CD8+ T cells that are old and don’t work as well anymore. “CD” is just a way that immune cells are named.

Enteropathy – any disease of the digestive tract, from the stomach to the small intestine, to the colon. Typical manifestations of enteropathy in APDS are diarrhea, the inability to absorb nutrients from food, or inflammation of the intestine.

Flow cytometry – a laboratory technique your doctor may use to run blood tests. Flow cytometry allows doctors to identify the numbers and types of B and T cells present in the blood.

Genetic Testing – a medical test that looks at your DNA for any variations in genes. Genes act as instructions to make proteins, which carry out functions in your body. Some gene variations lead to disease. Genetic testing is used to identify these cases. The results of a genetic test can confirm or rule out a suspected genetic condition or help determine a person’s chance of developing or passing on a genetic disorder to their children.

Glomerulonephritis (GN) – inflammation of the glomeruli, which are structures in your kidneys that are made up of tiny blood vessels. These knots of vessels help filter your blood and remove excess fluids. If your glomeruli are damaged, your kidneys will stop working properly.

Heterogeneous – diverse in character or content. Symptoms may be different in each person with APDS.

Immunoglobulin A (IgA) – an infection-fighting antibody commonly found in the linings of the airway and digestive system, as well as in spit and tears. Sometimes people with APDS have low levels of IgA.

Immunoglobulin G (IgG) – the most common type of antibody in your blood and other body fluids. Antibodies protect you against infection by “remembering” which germs you have been exposed to before. Some people with APDS have low levels of IgG.

Immunoglobulin M (IgM) – found mainly in blood and lymph fluid, this is the first antibody the body makes when it fights a new infection. 58-75% of people with APDS have been reported to have high levels of IgM. Typically in the immune system, too much of something is as serious as having too little. Elevated IgM levels can contribute to autoimmunity, lymphoproliferation, and other APDS symptoms.

Lymphoma – a type of cancer of the immune system that occurs when B or T cells change and grow out of control.
Lymphoproliferation – overproduction of B and T cells. It can appear as swollen tonsils, swollen lymph nodes, an enlarged spleen or liver or as nodules in the airway or digestive tract. 71-89% of people with APDS have been affected by lymphoproliferation.

Memory B cells – B cells that have encountered a particular foreign object like a bacterium or virus before, and can be reactivated quickly if it enters the body again. People with APDS often have low numbers of memory B cells.

PIK3CD and PIK3R1 genes – genes involved in making parts of the PI3K delta protein that is important for immune cell development and function.

PI3K delta – a protein that controls many processes within B and T cells that helps guide their development and function. In APDS, PI3K delta is more active than it should be, leading to problems with B and T cells.

Primary immunodeficiencies (PI) – rare genetic disorders that impair the immune system. Without a functional immune response, people with PIs may be subject to chronic, debilitating infections, and other symptoms such as swollen lymph nodes/spleen or autoimmunity. Primary means it’s genetic, so the immune impairments are present from birth. 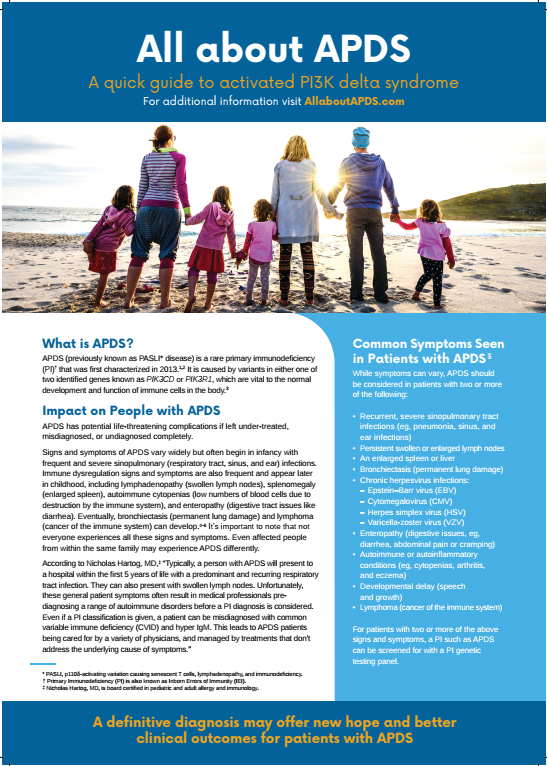 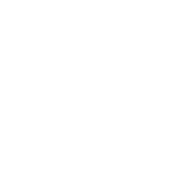